Lighting the Opening Ceremony Olympic flame might be an honor bestowed on a relative unknown.

London 2012 organizers are considering a big Opening Ceremony shock: No major celebrity could be assigned to light the Olympic flame.

It is widely expected that a sporting legend, such as Great Britains five-time Olympic rowing gold medalist Sir Steven Redgrave, will perform Friday’s honor. However, a senior Games source told Yahoo! Sports that a surprise option is being mulled over.

"Everyone assumes it will be a big name, and of course it is easy to reel off a list of worthy candidates," the source said. "But remember John Mark, it could happen again. Not everything is as clear-cut as it seems."

To understand the mention of John Mark requires delving into Olympic history, to the London Games of 1948. In the first Olympics held following World War II, it was Mark, a little-known runner who had failed to qualify for the Games, who stunned the crowd at Wembley Stadium by emerging from the tunnel, running around the cinder track and lighting the flame.

Several other candidates for the ceremony had been mentioned, including Prince Philip – husband of Britain current monarch, Queen Elizabeth II, who was then a young newlywed princess. The favorite for the role was Sydney Wooderson, the European 1,500 meter and 5,000 meter champion and former world record holder of the mile. 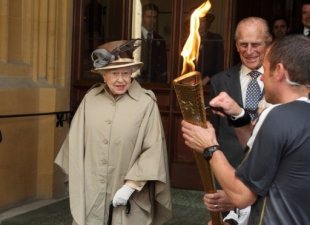